The consumption of meat also leads to large amounts of environmental damage to our dear planet. Meat eating is one of the primary causes of water pollution, food shortage, water shortage and climate change. 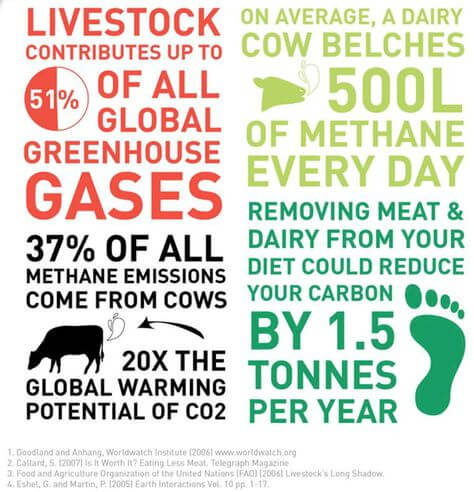 Eating meat can lead to great deal of water pollution in an industrialized city. The raising of thousands of animals in slaughterhouses and factory farms leads to the accumulation of more than 1 million tons of feces that contain bacteria, pesticides and harmful chemicals. Much of this waste then flows into streams and rivers, contaminating important water sources for humans and other types of life.

Raising animals in slaughterhouses and factory farms is a very inefficient process because animals eat large quantities of grain and only give back little meat in return. Scientists estimate that most cattle need to fed 10 kilograms of grain only to give back 1 kilogram of meat. The worlds cattle consume a quantity of food equal to the need of around 9 million people, which is more than the whole human population of Earth. According to Worldwatch Institute, “In a world where an estimated one in every six people goes hungry every day, the politics of meat consumption are increasingly heated, since meat production is an inefficient use of grain – the grain is used more efficiently when consumed directly by humans. Continued growth in meat output is dependent on feeding grains to animals, c reating competition for grain between affluent meat-eaters and the world’s poor”. Scientists and researchers warn us of the serious food shortages the world could face in the future if grain continues to used in raising animals in slaughterhouses. 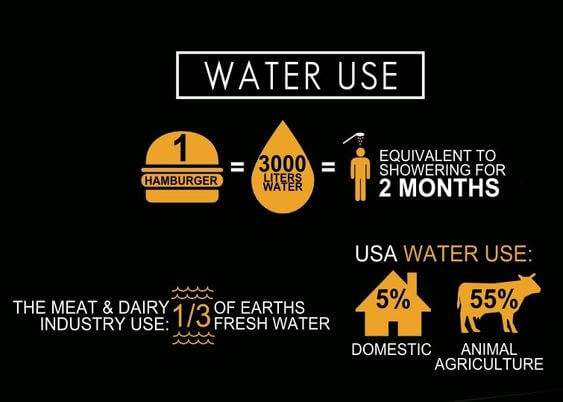 Droughts and water shortages are being experienced on the daily by many people. The world's water supply is still being diverted to animal agriculture. Where it take around 21000 liters of water to produce 1 kilogram of meat, it only takes 510 liters of water to produce 1 kilogram of wheat. A vegetarian diet requires around 15 times less water per day than a non-vegetarian one. By being vegetarian, we can save large amounts of water, something that is a necessity for human life.

Cattle raised in slaughterhouses produce many toxic gases such as methane and nitrous oxide. Methane from cattle is estimated to generate around 20% of overall US methane emissions and nitrous oxide is a gas that is 300 times more potent than carbon dioxide. These gases hugely contribute to climate change.